It’s hard to believe that after 10 years it has taken me this long to check out this fast-paced, high adrenaline extreme sport right in my own back yard. On September 8, 2019, I officially made it through the gate. Kelly Morrow, a good friend of mine agreed to take me on a tour as she has attended the races for years, so I picked her up and off we went.

I always knew that motocross racing was a huge deal for the McCannell family but as I said before I had never taken the time to check it out. Raising artists and not extreme sport-loving children in Louise led me down a different path for my parenting years, now in this position as Community Development Officer it is important that I try and attend as many events as possible and that means extreme sports just down the gravel road from my home. It did not disappoint!

The first face I saw as we came in the gate at Prairie Hill MX was Melissa McCannell, smiling away and happy to see us! This was a great start, being greeted in such a friendly way makes all the difference to your day. 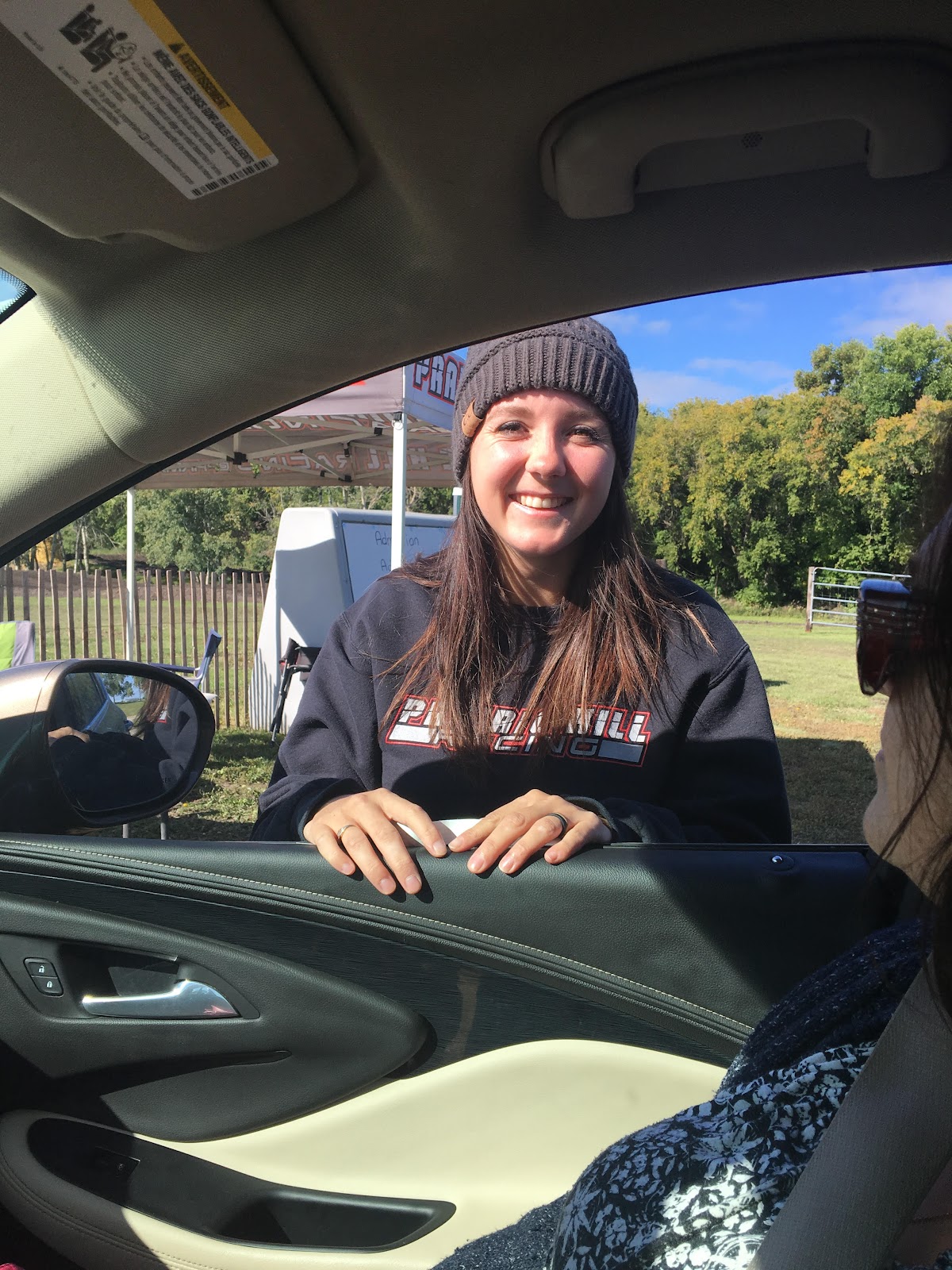 As soon as we drove down the entryway road we could see motorbikes flying everywhere,  as I paid my entrance fee there were bikes roaring throughout the track. All of them racing for the best time and jumping high above the prairie horizon. 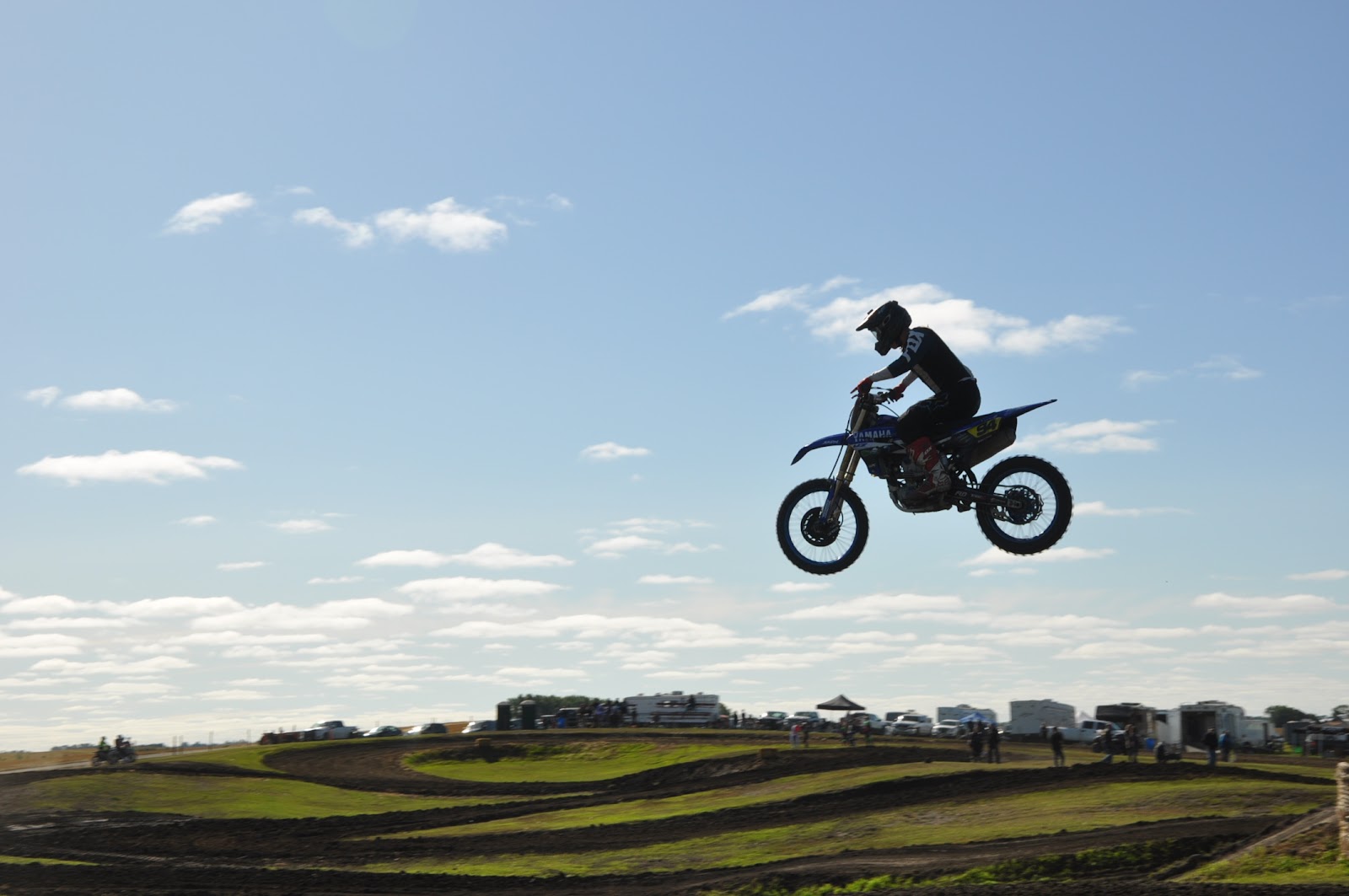 Kelly began to tell me that her daughter Ashley was Flagging for the McCannell family. I was pretty curious about what that meant, not having any knowledge of this sport she went on to explain that the McCannell’s hire a lot of young people from Louise to be flaggers throughout the race. There are many flagging stations set up and it is the flagger’s job to pay close attention and drop their flag if a rider goes down to warn all the other riders and flaggers that a person is off their bike. If one flagger puts up their flag it begins a sequence of events that triggers other flaggers and various other ref’s and EMT’s that there is a person off their bike. The flaggers have a super important job so they have to pay close attention. I was told that Prairie Hill needs 20 flaggers for the weekend. Each flagger is paid $100 a day to sit on the race track in special flagging stations and raise their flags as needed. Incredible job for our young people. 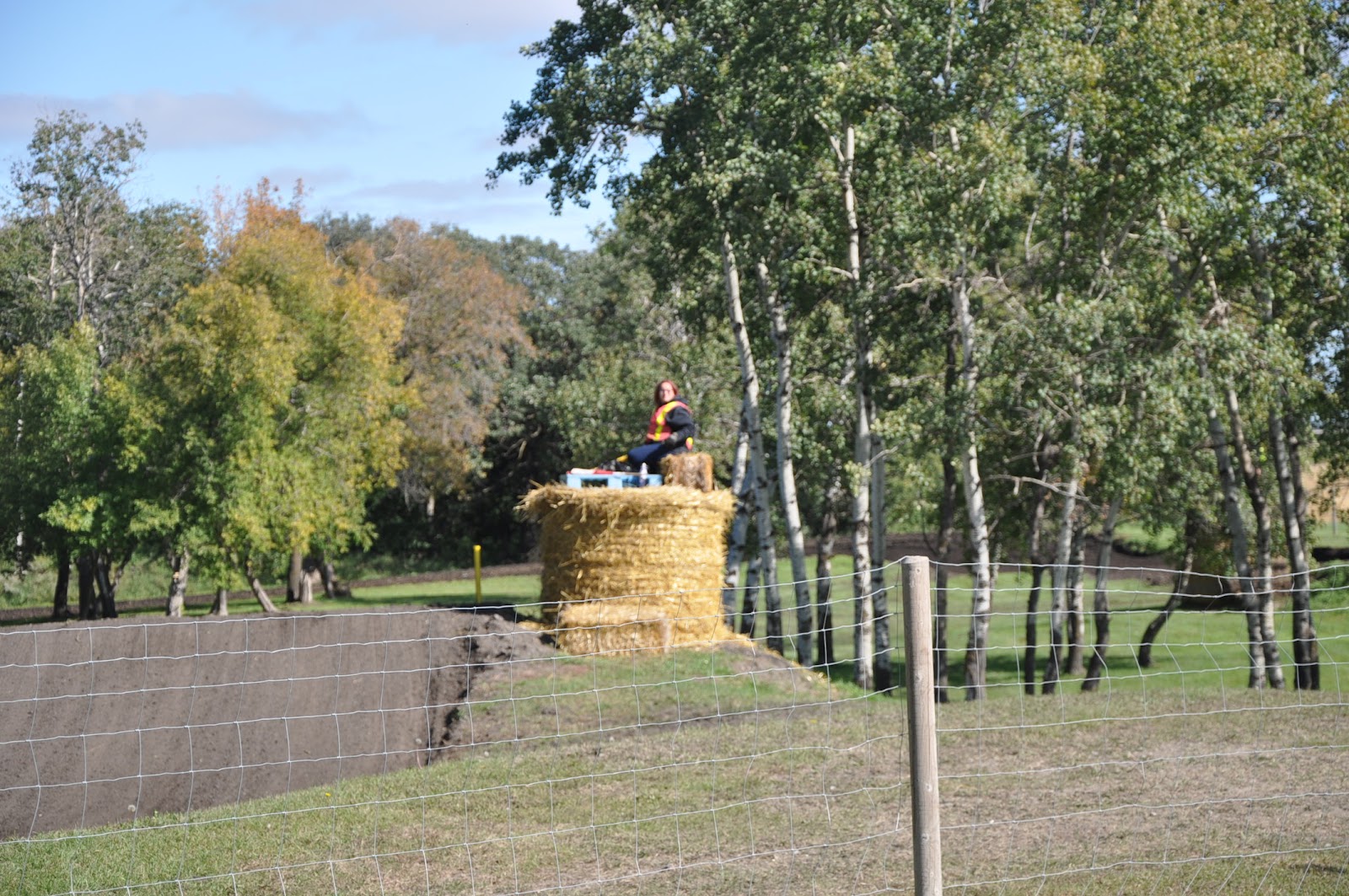 The Races are going non-stop. The machine that makes up Prairie Hill MX is incredible to watch, from flaggers like I talked about above to referees doing various jobs like letting the racers know how many laps they have done, to a rider on a quad running the track with the riders on the sideline making sure that there is only fair play. There are officials everywhere, starting races and keeping time, announcing and watching. At one point Prairie Hill MX hired First Responders from Louise to be at the track throughout the races but not now, there is a dedicated ambulance that comes to every race that sets up their own First Aid trailer and has medics on the track ready and waiting. With an extreme sport like Motocross, it is mandatory to have a dedicated ambulance and trained first responders on site. 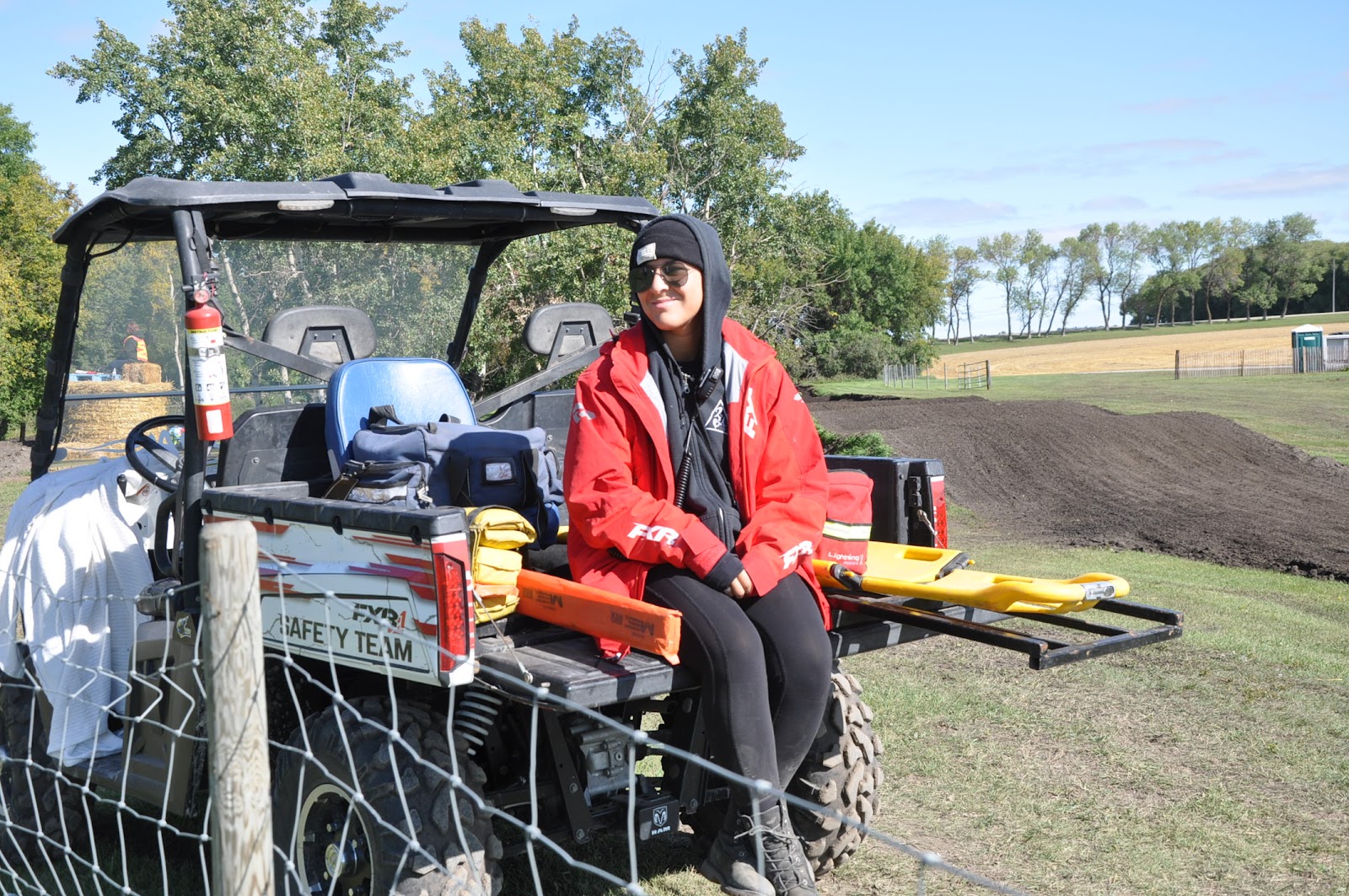 I watched as each race began and noticed that only half the riders start out and then a few seconds later the second bunch of riders go. Kelly explained that this stops the bottleneck around the first curve of the track. New races begin before the current race is even finished. It is seamless really and super incredible to watch. It takes lots of organization and planning to pull off multiple races like this and Praire Hill MX makes it look easy!

Beauty in the loudest way! That is a great way to describe this event in Louise. The whole area is situated in a park-like setting with oak trees, well-manicured grass surrounded by crops grown by the McCannells themselves. I am pretty sure we counted over 100 campers on Sunday and Kyle McCannell told me that there was, even more, the day before. This event felt like a family affair, everyone knew everyone and there was so much happening. All the campers were lined up in rows with generators everywhere, tents devoted to motorbikes and family of all ages rumbling about the space. 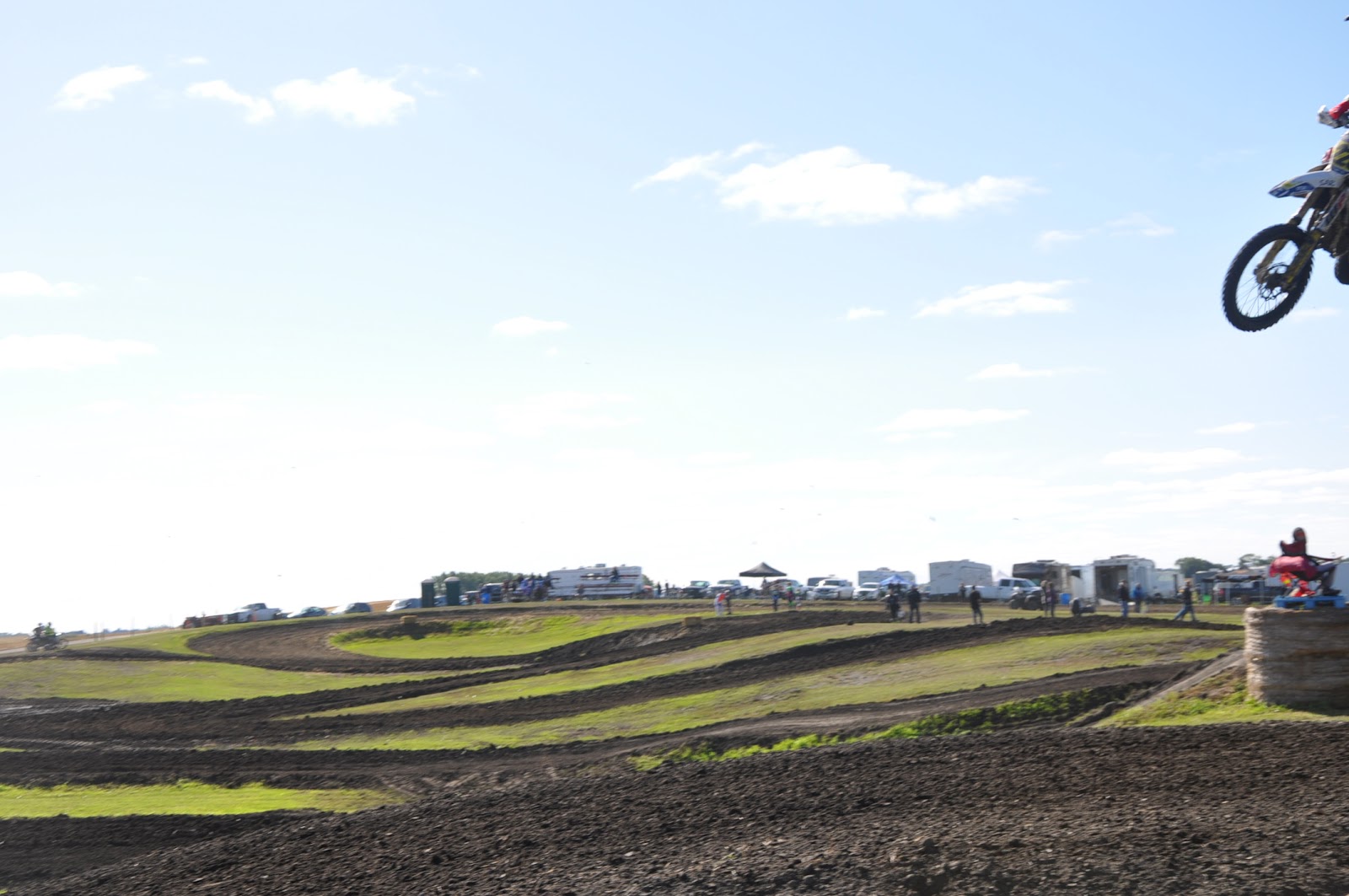 There was a food booth set up by Pizza Time from Pilot Mound and I even got a hot Americano coffee served up, so delicious! To my surprise, I noticed the old Pilot Mound High school play structure set up on-site! 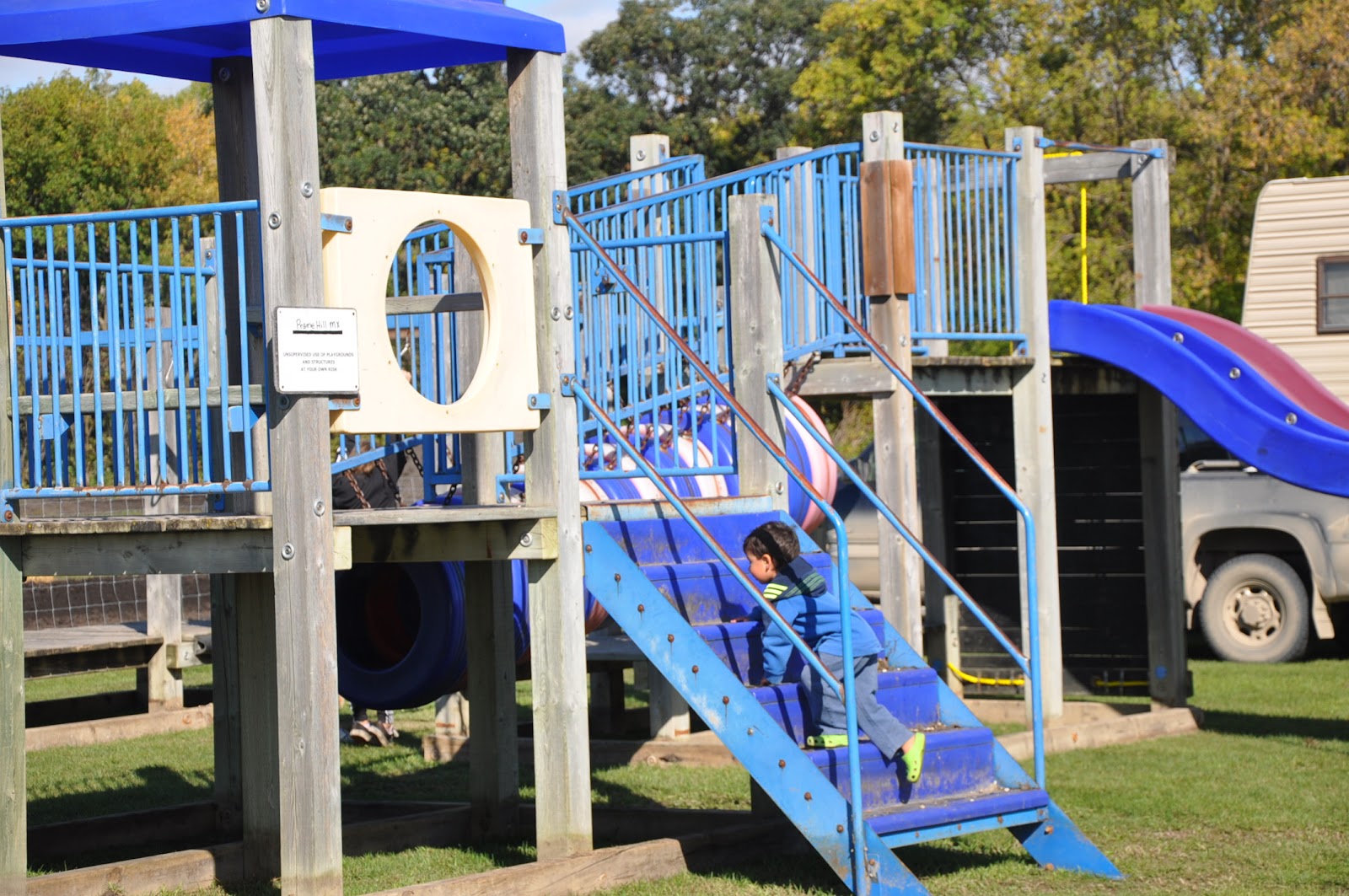 So cool to see children playing away all the while fast-paced dirt throwing motorbikes are flying past in the background. Truly something you have to experience in order to get the full effect.

There is a new addition to the track this year. Curtis McCannell was telling me that in order to get a National race with the motocross association they needed to extend the track in order to extend the time for the pro riders. So Kyle just made it longer! Funny I guess if you have a skid steer and all the equipment to move earth, making a race track seems like no big deal!

The 2020 races are not yet determined but Prairie Hill MX has a facebook page https://www.facebook.com/PrairieHillMx/ so give them a follow and stay tuned to the races. Be sure to prepare yourself for this sport. It is loud, it is fast and it is one incredible machine that moves continualy as you walk about the park-like space that the McCannells have dedicated the last 10 years of their life too. This attraction is not one to be missed. The economic impact of this event is huge for Louise, from families shopping to buying gas or staying in hotels or even the locally hired flaggers Prairie Hill MX puts Louise on the map and bringing 1000’s of people to our municipality.

Thank you to Kelly Morrow for being my guide and the McCannell family for letting me tour around and ask questions. 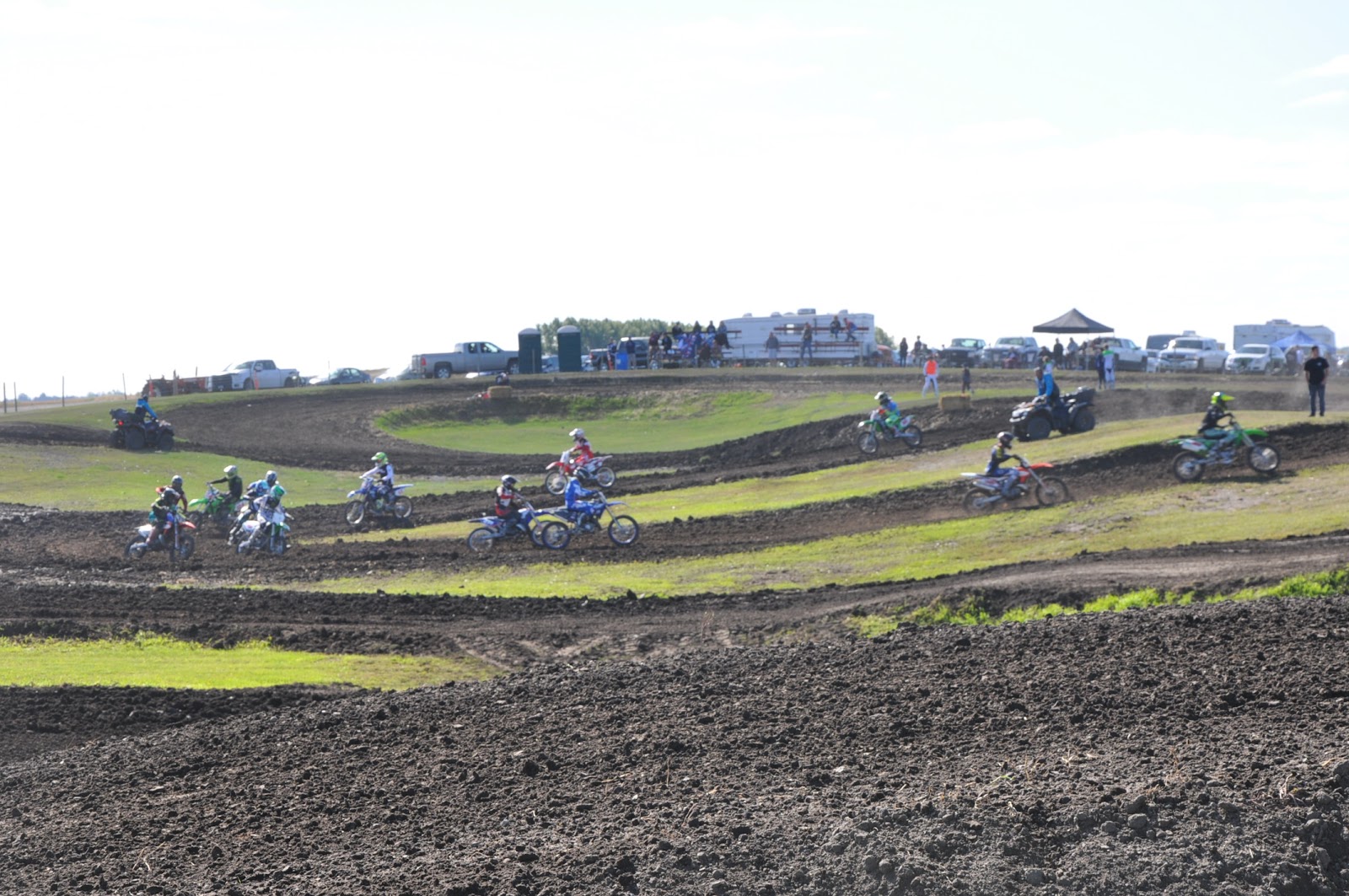